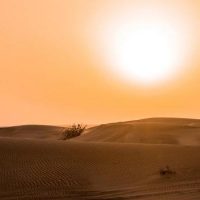 Reuters describes how 17-year-old Waderi, resident of Jacobabad, Pakistan, “which last month became the hottest city on Earth,” is back in the fields a few weeks after giving birth, “working in temperatures that can exceed 50°C, with her newborn lying on a blanket in the shade nearby so she can feed him when he cries.”

And then there is Nazia, a young mother of five who collapsed on May 14 while preparing lunch for visiting family members in a sweltering kitchen that lacked even a fan to keep her cool. Taken to a nearby Jacobabad hospital on that 51°C day, Nazia was pronounced dead from heat stroke.

The searing heat wrought by anthropogenic climate change poses a profound threat to pregnant women, as well as to the children developing within them.

Citing a British Medical Journal meta-analysis of 70 mid-1990s studies, Reuters writes that “for every 1°C in temperature rise, the number of stillbirths and premature deliveries increases by about 5%.”

Humid heat conditions are measured by “wet bulb temperatures,” taken by a thermometer wrapped in a wet cloth, Reuters explains, adding that wet-bulb measures of 35°C or higher are considered “the limit to human survival.”

Jacobabad “crossed that threshold at least twice since 2010,” and according to a May, 2020, study in the journal Science, “such ‘extreme humid heat events’ have more than doubled in frequency in the last four decades.”

Adding to the suffering of young mothers like Waderi, their poverty and constant, gruelling work means many of them “are not seeking medical care” and thus remain “highly undocumented,” said Cecilia Sorensen, director of the Global Consortium on Climate and Health Education at Columbia University in New York.

Speaking more broadly about the plight facing many women in Jacobabad and the wider Sindh region that straddles the Pakistan-India border, aid worker Liza Khan told Reuters, “it feels like no one sees them, no one cares about them.”

Systemic poverty and frequent power cuts are exacerbating the suffering—which, again, falls disproportionately on women whose existence leaves them shunting back and forth between scorching fields and suffocating kitchens.

Replacing open-fire cooking with clean energy stoves, offering medical and social services in the relative cool of the early morning and evening, and replacing ubiquitous dark-coloured tin roofs with some kind of reflective material are among the steps experts suggest to ease the suffering.

Warning that the climate crisis “poses a significant threat to the well-being of unempowered women in rural areas and urban slums,” Pakistan’s Climate Change Minister Sherry Rehman told Reuters the country’s future climate policies will need to address the specific needs of its women, especially the poorest among them.

‘A kick in the teeth’: pensioners voice anger over government’s tax shake-up