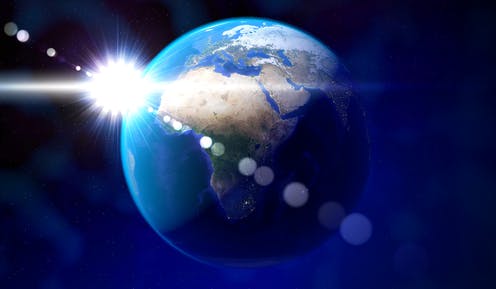 The developed countries of the “global north” are responsible for 92% of excess global emissions, according to a 2020 study in The Lancet Planetary Health. Yet it is the rest of the world – the “global south” – that disproportionately bears the brunt of climate change. Emergency measures to reflect more of the Sun could help temporarily avoid the worst impacts, but it must serve to improve the safety of those most affected.

Somewhere between 15% and 40% of CO₂ emissions will remain in the atmosphere longer than 1,000 years. Since so much climate change is already “locked in”, any strategy to tackle it based on emissions reduction alone, regardless of how quickly we reduce them, would still result in catastrophic ice losses in the Arctic and Antarctica leading to sea level rise, loss of low-lying countries and hundreds of millions of climate refugees. It would still mean global food and water shortages, massive flooding and wild fires, and a permanent loss of ecosystems. These devastating changes will continue to disproportionately impact the global south.

We believe the best way to avert major disaster is to develop and deploy temporary schemes which can partially shield some of the Earth from incoming solar radiation, at least until emissions reductions and carbon capture and storage can be scaled up.

There are two main approaches which have very different characteristics. The first involves releasing small reflective particles into the upper atmosphere, which would reflect sunlight back into space. Known as “stratospheric aerosol injection”, this process would cool the globe for several years or more, but it is controversial because of the potential for global and long-lasting unintended consequences.

The other approach, “marine cloud brightening”, involves ships generating sea spray. The water droplets evaporate and the resulting salt crystals get carried up into the air. This gives clouds something to form around, and helps cool the planet since the clouds formed by small salt crystals reflect more of the Sun’s energy.

As these particles are returned to the ocean in a matter of weeks, it is much easier to “turn off” cloud brightening if ever it was deemed necessary. Together with its potential to be deployed on a more regional basis, this makes it more likely to be acceptable to the public and policymakers.

Most of what we understand about these technologies come from computer simulations known as climate models. There have been some real-world experiments, however. For instance China has injected particles in the atmosphere to try and seed new clouds and encourage precipitation in remote mountains, and has covered a glacier with cloth to prevent it melting. In Peru, authorities once painted a mountain white in order to reflect more heat and protect its glacier (darker colours are more absorbent). There are plans to protect Australia’s Great Barrier Reef with cloud brightening.

These initial steps give us valuable insights into the possibilities and limitations of these technologies. But further funding and research is needed to understand the limitations and risks.

There are technical questions to be addressed, but there are also critical social science issues – research will need to examine the contexts in which these kinds of technology develop, with a focus on dimensions of gender, ethics, justice, equity and sustainable development among communities most affected by climate change. Research collaborations and governance mechanisms must evolve to provide space for leadership from these communities, which will in turn strengthen global capacities to develop and deploy safe, inclusive technologies as an intermediate solution to climate change.

The cost of climate injustice cannot be easily quantified. However, communities least able to adapt, perhaps due to a lack of resources, pre-existing conflicts, or because they’re based in an area already prone to droughts or hurricanes, may well argue that no amount of climate change is safe. Technological advancements such as marine cloud brightening mean there is a potential pathway to avert catastrophe and this needs to be further developed.

If we place human life and global environmental security at the heart of our response, we must explore potential technologies that could save countless lives and stave off the worst impacts of climate change until mitigation policies catch up with reality. But crucially, decisions on how the research is undertaken and whether interventions should be deployed have to be led by (not just involve) those who will otherwise be most affected by climate change.

One possible way forward is to establish research centres in the global south. Exchange between centres could be co-hosted by an inter-governmental body such as the UN’s environment programme UNEP, together with civil society and academia. Something similar happened during the Green Revolution in the 1950s and 1960s when new agricultural technologies spread worldwide, and can be seen in humanitarian situations today.

Regional bodies, such as the African Union and the Association of Southeast Asian Nations, could get involved, though the question of who will actually deploy these technologies – which country’s navy or air force will spray the particles – should be decided by international agreement. Nations most affected by the effects of climate change (and least able to adapt) should play leadership roles in not just steering the research but overseeing who, how and when any deployment is made.

The authors do not work for, consult, own shares in or receive funding from any company or organisation that would benefit from this article, and have disclosed no relevant affiliations beyond their academic appointment.

The Importance Of Good Product Packaging For Your Business