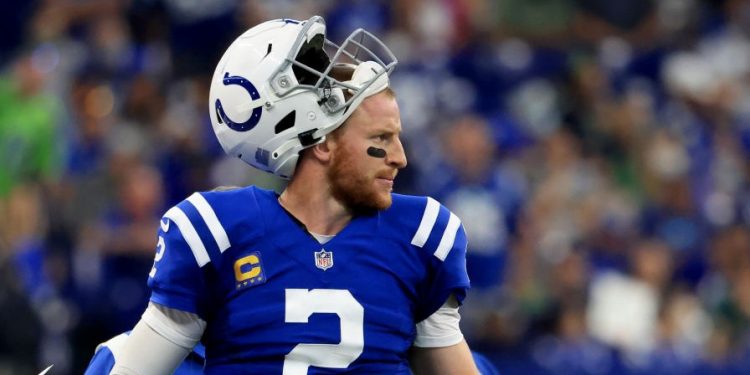 The Indianapolis Colts are one of the NFL’s hottest teams, winning six of their last seven games, most recently taking down the Cardinals on Christmas to move to 9-6, allowing them to control their own destiny in the playoff hunt.

They are a game back of the Titans for the AFC South division title, but tied with the Patriots for the fifth and sixth wild card spots in the AFC. Two wins in their final two games would guarantee the Colts a playoff berth, and with the Raiders and Jaguars remaining on the schedule, they figured to be favored in both. However, this Sunday they will have to face the Raiders, by far the tougher of the two, without starting quarterback Carson Wentz. Wentz was placed into COVID protocols on Tuesday, and as an unvaccinated player he cannot test his way out of protocols and will not be able to possibly return by Sunday.

We have placed QB Carson Wentz on the Reserve/COVID-19 list. pic.twitter.com/5gb4bOmVQf

That is a significant deal for the Colts and a lot of other teams in the AFC playoff hunt, including the Las Vegas Raiders, who are one of the four teams tied at 8-7 and chasing that final wild card spot. The Colts will likely turn to rookie Sam Ehlinger in Wentz’s absence, which is far from the ideal circumstance for a team hoping to lock up at playoff berth this weekend.

While Jonathan Taylor and the Colts rushing attack is by far their biggest strength on offense, having the threat of the pass that Wentz provides is critical to keeping the box at least a bit lighter for Taylor and the Colts O-line to go to work. That won’t be there with Ehlinger and the Raiders figure to load up to slow down Taylor on Sunday. Should Vegas be able to win against a Wentz-less Colts, it will create an even bigger logjam in the AFC, one Indianapolis was really hoping to avoid being in entering Week 18.

UPDATE: It’s possible that the NFL will adjust protocols to make all players, not just vaccinated ones, subject to a shorter 5-day protocol for asymptomatic cases, which could potentially open the door for Wentz to get cleared by Sunday morning.

NFL and NFLPA are getting close to adopting the new CDC guidelines that would reduce the quarantine time to five days from 10 days for all players, including those who are unvaccinated. Agreement could be done today, per sources.

Blinken sets limits on US talks with Russia

wiiw: Slowdown in CEE not as sharp as expected