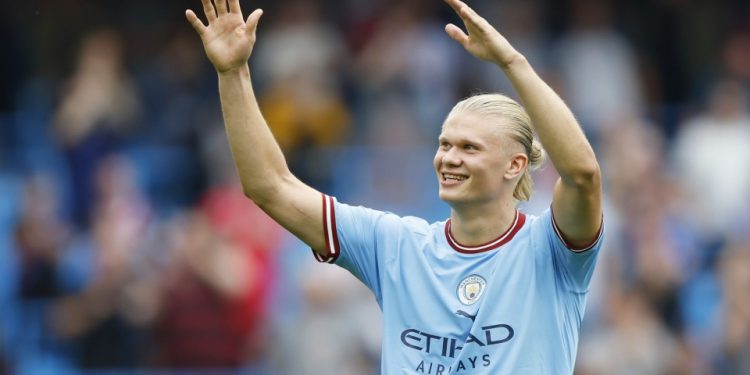 Erling Haaland has been backed to break the record for most goals in a single Premier League season.

The Man City striker has been on fire at the start of the campaign, scoring six goals in just four games.

Haaland got his first Man City hat-trick on SaturdayGetty

Three of those game on Saturday as City came from 2-0 down to beat Crystal Palace 4-2.

Haaland is living up to his reputation as one of the biggest talents in world football and any doubts that he would be able to cut it in the Premier League have gone.

Former Aston Villa striker Gabby Agbonlahor has tipped the Norwegian to have a record-breaking campaign.

Mohamed Salah holds the record for most goals in a 38-game single season when he hit 32 for Liverpool in 2017/18.

Both Alan Shearer and Andy Cole managed 34 when it was a 42-game season.

Agbonlahor and GameDay phone-in co-host Jamie O’Hara were having a debate about who they would rather in their team: Haaland or Harry Kane?

Agbonlahor: “I look at the third goal, on the break, I don’t think Harry Kane scores that third goal.”

O’Hara: “I know we’ve been having this argument. For me Haaland is going to be a superstar, he already is a superstar.”

Agbonlahor: “He breaks the record for goals this season.”

Agbonlahor: “I think he will. He’s got five goals in three games. He’s not even probably at his best yet.”

O’Hara: “I’d still have Harry Kane in my team.”

Haaland is already looking like a superstar in a City shirtGetty

Agbonlahor: “Really? Is that with your Tottenham Hotspur football hat on.”

O’Hara: “Imagine Harry Kane in Man City’s team. You have to remember Haaland is playing for Man City, they dominate possession,

“If you put Harry Kane in that City team, I think he’d give you more.”

Agbonlahor: “There’s things Haaland can do that Harry Kane can’t. He’s quicker for one, he’s stronger. Not as good as Haaland at holding the ball up.”

O’Hara: “Harry Kane is one of the best number 9s and best number 10s in the world. He can do everything.

Agbonlahor: “I’d rather have Haaland.”

Six down for Haaland and another 26 to go for him to match Salah’s tally.