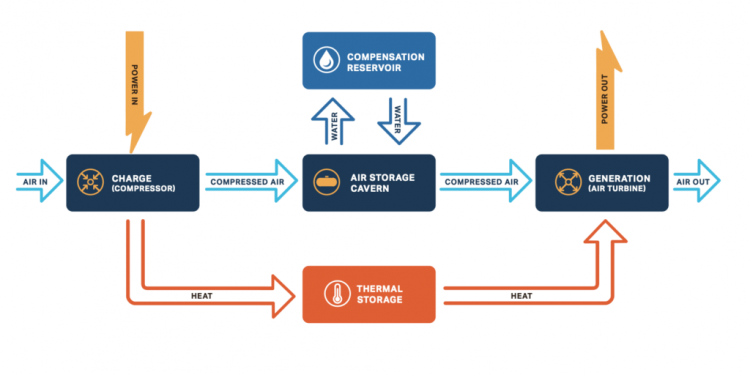 The preferred equity financing commitment comes from Goldman Sachs Asset Management’s Private Equity and Sustainable Investing businesses. It will be paid out in tranches tied to project milestones being achieved by Ontario, Canada-headquartered Hydrostor.

Hydrostor is commercialising its proprietary compressed air energy storage technology, claiming it can be a cost-effective long-duration energy storage solution. While the company has to date only built one commercially operating 2.2MW / 10MWh+ system which came online in 2019 in Ontario, it currently has 1.1GW / 8.7GWh of projects in Australia and California which are claimed to be “well underway”.

The fresh investment will support the development and construction of those projects, and expand Hydrostor’s global development pipeline.

As early as 2017, consultancy Deloitte identified the company’s Ontario pilot scheme as an example of innovation and technological improvement in the energy storage space, as Energy-Storage.news reported at the time.

As it charges, it also stores heat generated by the compression process in an adiabatic thermal management system. This use of thermal energy is part of the ‘A’ in A-CAES, giving it better round trip efficiency than other compressed air technologies, according to Hydrostor. The existing Ontario project serves multiple applications, including peaking capacity and ancillary services.

The A-CAES company secured CA$10 million (US$8 million) of growth capital last summer and filed applications with the California Energy Commission (CEC) to get licensing approval for two California projects, one of 400MW / 3.2GWh in November and another of 500MW / 4,000MWh in December.

A report by ACIL Allen, a consulting group, completed a third-party study last June which found a 200MW / 1,600MWh A-CAES project proposed in a remote part of South Australia could contribute more than half a billion dollars to the local economy while making local electricity networks more stable.

Goldman Sachs Asset Management’s investment, which is thought to be among the largest commitments by a single investor into a long-duration energy storage company, will help Hydrostor accelerate project execution through development, construction and operations, together with the company’s existing investors and partners.

The funds will also be used to support Hydrostor’s development and marketing activities in markets which have identified a near-term demand for long-duration energy storage.

Other recipients of investment in the long-duration energy storage space include various flow battery, thermal and mechanical energy storage technology companies. Last year at COP26 the Long-Duration Energy Storage Council was launched representing 16 of those companies among its 24 founding member organisations.

In Energy-Storage.news’ ‘Year in review 2021’ series of recent articles on the state of play in the industry, EPC firm Burns & McDonnell and developer Recurrent Energy — key players in the downstream deployment end of the sector — highlighted the rising interest in and expected growth in demand for long-duration energy storage.

Collective Bargaining for the Workplace and Democracy