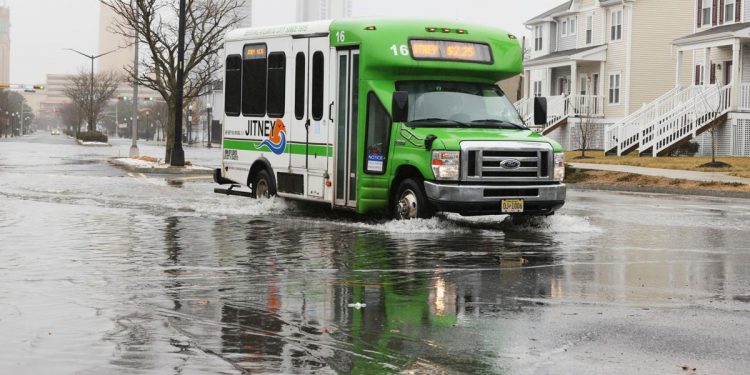 ATLANTIC CITY — Like many of the 21,735 casino workers in New Jersey, Mike Luko’s ability to get to and from work can be affected by the direction of the moon, the phase of the moon and what storms are nearby, all of which affect coastal flooding.

“Sometimes it’s a hassle, they end up detouring you at Route 9, or they close the road,” said Luko, of Egg Harbor City. Luko takes the White Horse Pike to get to his job as a carpenter for Bally’s Atlantic City, unless the spilled over bays get in the way.

On average, it’ll happen two dozen times a year. According to the Union of Concerned Scientists, that’s how many times the tide gauge at Steel Pier in Atlantic City detects tidal flooding, roughly six times more annually than in the 1950s and 1960s.

It’s not just commuters who contend with the tidal flooding on the roads. Tens of millions of tourists travel to Atlantic City each year.

Chait described the Black Horse Pike as a “perfect example” of an important road where operations are disrupted by floodwaters.

“When you look at roadways and the infrastructures that currently exist, there are enormous issues. … That also carries into our tourism,” Chait said.

While the roads in and around Atlantic City have been affected by tidal flooding throughout the city’s history, the frequency of flooding is on the rise because of the 1.5 feet of local sea level rise that has occurred since 1911, according to the National Oceanic and Atmospheric Administration. Exacerbating the flooding is the sinking of land, or subsidence, along the mid-Atlantic coastline.

Those who frequent the city accept the flooding as a way of life. But for each foot in sea level rise, it will cost exponentially more to deal with it.

The impacts from sea level rise affect almost every facet of life here, from the economy to the culture and physical landscape. To better understand how the sea continues to shape the resort, The Press of Atlantic City and Climate Central are examining the challenges, strategies and opportunities as the city deals with increasing flood risks.

Schools and local restaurants are being forced to cope with increasingly frequent flooding, forcing workers and parents to trod through floodwaters and in some cases miss shifts. Homeowners, particularly those in the back bay neighborhoods, face heavy financial burdens from flooding, whether it’s repairing them after storms or paying more for flood insurance.

For emergency managers, it’s the flooding of roadways that poses “huge problems,” said Kimberly McKenna of the Stockton University Coastal Research Center, which researches and works with local governments and state agencies to monitor and manage intensifying flooding.

“For emergency safety and stuff, it’s probably number one on the list,” McKenna said.

Other businesses in Atlantic City catering to tourists also suffer.

Frank Becktel is a jitney driver, part of Atlantic City’s minibus service that has moved people around the city since 1915. He lives in what he describes as the lowest point in Atlantic City, near Gardner’s Basin. It floods so often on his street, the bottom of the fire hydrant near him is rusted from years of saltwater intrusion.

“We’re owner-operators, we don’t have the luxury of stopping when the water’s too high. We only get paid by the people that we pick up. If they’re standing in the flood waters, we have to get them,” he said.

Becktel said his riders often go to great lengths not to miss work or an appointment.

“They try to walk to places where it’s drier, they stand on high points on the road. If they catch a jitney, they know how to get to the high points, they wear boots and get on the jitney as quickly as possible,” he said.

Both the jitney drivers and the passengers who need to move around the city are in tune with the weather and flooding conditions.

From 1993 to 2017, sea levels in New Jersey rose an average of 1.9 inches per decade, according to a Rutgers University Science and Technology panel. Of that 1.9-inch growth, nine-tenths of an inch comes from natural processes, such as sinking land. A warming world, driven by man-made greenhouse gas emissions, accounts for 0.87 inches, while 0.2 inches of the rise is due to unknown factors. The rate of sea-level rise is increasing globally, and it will continue to affect Atlantic City at a quickening pace.

By 2050, there is a 50% confidence level of sea levels rising 1.4 feet above the 2010 average, regardless of emissions outcome, according to the most recent Rutgers Science and Technical Advisory Panel.

Robert Noland, a professor at the Edward J. Bloustein School of Planning and Public Policy at Rutgers, worked with a Rutgers colleague and Climate Central’s sea level scientists to investigate how rising seas could affect workers in Atlantic and Cape May counties.

The research combined localized sea level projections with information about road networks to identify where travel would be blocked by coastal flooding, and how many workers that would cut off from their jobs. This information was combined with a “gravity model,” a planning tool that provides a measure of access based on travel time to job locations.

The paper, published two years ago, warned that increasing sea levels will have “large impacts on people and the economy, and large populations will have access to employment disrupted well before their own properties or places of employment may begin to flood.”

While most climate impacts are felt far more acutely by low-income communities than wealthy ones, Noland said that “in this case, because there are a lot of wealthy households along the shore, they were getting hit hard” as well in the research findings.

And while coastal flooding is widely perceived to be a coastal issue, Noland warned that inland roads also flood throughout the area and that the research showed these closures would increasingly affect workers.

A “big limitation” of the research was that it approximated where residents’ jobs were located, Noland said, but it helps to demonstrate the skyrocketing impacts as seas continue to rise. The researchers developed a measure of job accessibility and looked at how it would be reduced throughout the two-county area as water levels continue to rise.

Percent reduction in the accessibility index by block-group for different levels of water height for Atlantic and Cape May counties. Atlantic City would see a 63, 64, 67, and 99 percent drop for one, two, three and six feet of sea level rise, respectfully.

Noland’s projections assume that roadways and other infrastructure remain unchanged through the coming decades. Efforts to protect them from flooding will reduce the impacts, and the state and local governments have myriad projects planned or underway to protect traffic from worsening hazards.

Like other state agencies, the New Jersey Department of Transportation has assembled a working group to help plan for extreme weather. The group is “developing recommendations that will be incorporated in our project designs and infrastructure maintenance practices” to protect the state’s roadways from effects of climate change, spokesperson Jim Barry said.

Some 4,175 casino employees live in mainland communities where Route 30 offers the most direct access to Atlantic City. More frequent flooding would mean they would have to pay a toll and ride the Atlantic City Expressway, something commuters such as Luko would rather not do.

For him and for Becktel, who has grown accustomed to his rusting fire hydrant, solutions to sea level rise — both long- and short-term — can’t come soon enough.