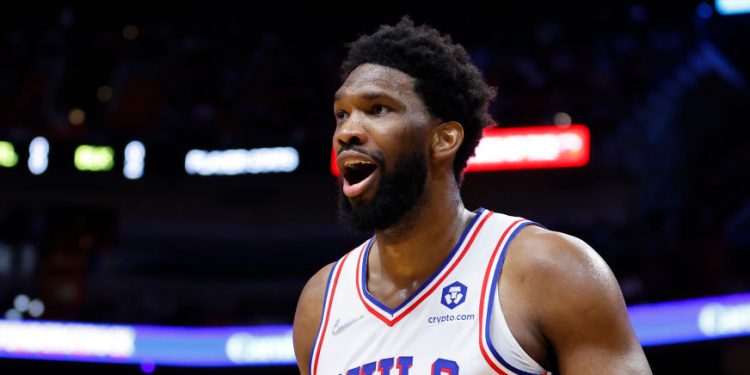 Wednesday afternoon featured a Champions League round of 16 match for the ages. PSG beat Real Madrid in the first leg of their two-legged tie, 1-0, in Paris last month. But today, the two teams made their way to the Spanish capital with one eye on an appearance in the quarterfinals.

The Parisians got a huge boost when standout forward Kylian Mbappe was in the starting XI, and during the first half, the young Frenchman showed why he’s expected to take the mantle of the best player in the world sooner rather than later. Mbappe ran into an acre of space, got the ball onto his preferred right foot, and beat Madrid’s Thibaut Courtois at the near post. It gave PSG a 1-0 lead in the match and a 2-0 lead on aggregate.

NEYMAR TO MBAPPE. COUNT IT.

Back in the U.S., Joel Embiid, arguably the NBA’s biggest Real Madrid supporter among players who never suited up for the club’s basketball team, took to Twitter to express his frustration before trying to put a silver lining on the cloud by addressing the rumors Mbappe is coming to Spain.

Why does Carvajal insist on playing so high against Mbappe out of all people?

Mbappe is the best player in the world and I can’t believe we’re getting him next year. Life’s good!!! #HalaMadrid

Embiid went on to say that he believes Mbappe will be the best player in the sport’s history.

And then, as they have done so many times, PSG collapsed in the Champions League. Real Madrid striker Karim Benzema put on a masterclass in how to take over a game from that position, scoring three times in 17 minutes to put the team up on aggregate, 3-2.

BENZEMA PULLS ONE BACK.

Gianluigi Donnarumma won’t want to watch that one back.

Real lead and Benzema is now the third top scorer in Real history, tied with the great Alfredo Di Stefano.

Embiid’s tone, as you could guess, changed dramatically, with the Sixers center going right to a state of disbelief.

Real Madrid would go on to see out a win and earn a spot in the Champions League quarterfinals, and Embiid celebrated the win, in large part because he thought there was some UEFA silliness afoot.

This is incredible. I’m still shocked. What a win!! UEFA thought they could punish RM for the super league and they lost #HalaMadrid

He wasn’t the only player in awe — former Real Madrid players Luka Doncic and Willy Hernangomez both were over the moon, while Nicolas Batum praised Benzema’s effort.

Madrid will now sit back and wait to see who it’ll play in the quarterfinals. Embiid, meanwhile, will take some time to celebrate his team’s win before the Sixers play the Brooklyn Nets on Thursday.

World Talks on a Treaty to Control Plastic Pollution Are Set for Nairobi in February. How To Do So Is Still Up in the Air