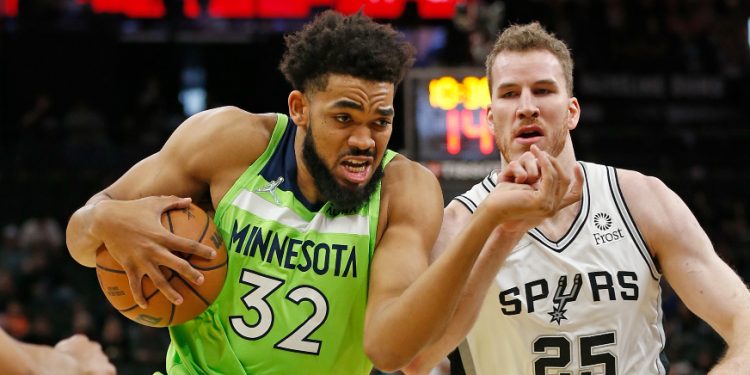 The Minnesota Timberwolves have been one of the best stories in the NBA this season, as the young Wolves have finally broken through into being a true playoff contender in the West for the first time since 2018.

On Monday night, Minnesota picked up its 40th win of the season (the team’s first 40-win campaign since 2018) against the Spurs and rode a truly sensational performance from their All-Star center Karl-Anthony Towns to get there. In a high-scoring affair in San Antonio — the final score was 149-139 — Towns put up a new career-high with 60 points, which is also the highest-scoring game for any player this season, passing Trae Young and LeBron James’ tie at 56.

Towns did his damage inside and out on a highly efficient night, going 19-of-31 from the field, including 7-of-11 from three-point range, and 15-of-16 from the free throw line on the night, for a final stat line of 60 points, 17 rebounds, and three assists. Early on, Towns was in attack mode, getting downhill and forcing the Spurs bigs to respect his ability to get to the rim which started to open up the three point line as they sagged off of him to protect the paint.

KAT getting things started with a flush! pic.twitter.com/sWXqzrnZ3J

@KarlTowns gets to the rim with a purpose. #RaisedByWolves pic.twitter.com/FrjUEQ1845

The third quarter was when Towns really erupted, scoring 32 points in the quarter to push Minnesota into a comfortable lead and get him to 56 on the night with the fourth still to come, as San Antonio continually lost Towns at the top of the key, where the Three-Point Contest champ is at his best and lit the Spurs up on this night.

@KarlTowns is up to 29 points in the game! #RaisedByWolves pic.twitter.com/swn2MyY8Ds

Towns played sparingly in the fourth but was inserted back into the game with a few minutes to go, sitting on 56 as his teammates fed him to try and get to 60. After splitting a pair of free throws, he hit that 60-point mark with a three-pointer that put the dagger in the Spurs (who had missed a three on the other end that would’ve cut the Minnesota lead to six and made things very interesting all of a sudden).

Another look at his bucket for 60.

It was a tremendous performance for Towns who has been on a tear of late, as have the Timberwolves, winners of eight of their last nine to stay within a couple games of the 6-seed and the similarly red-hot Denver Nuggets. Towns joins Shaquille O’Neal and David Robinson as the only centers since Wilt Chamberlain to score 60 points in a game, and on a night where the basketball world was locked into the MVP battle in Philly between Nikola Jokic and Joel Embiid, it was Towns who had the performance of the night among NBA big men.