Latin America Should Not be the ‘Backyard’ Where U.S. Plastic Waste Gets Dumped, Campaigners Say 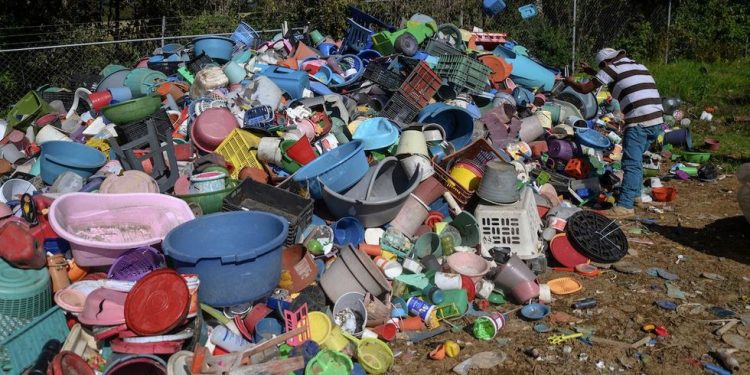 Latin America does not want the U.S.’s plastic waste.

As data shows that U.S. plastic exports to some countries in the region more than doubled during 2020, more than 70 organizations from around the world called for an end to this trade, and for the U.S. to manage its own waste.

“Crossborder plastic waste trade is perhaps one of the most nefarious expressions of the commercialization of common goods and the colonial occupation of territories of the geopolitical south to turn them into sacrifice zones,” Fernanda Soliz, health area director at Simón Bolívar University, Ecuador, said in the letter. “Latin America and the Caribbean are not the backyards of the United States. We are sovereign territories, and we demand the respect of the rights of Nature and our peoples.”

The data, published by members of the Global Alliance for Incinerator Alternatives (GAIA) in Latin America from Mexico, Ecuador, Argentina and Chile, was based on the U.S. International free trade database, USA Trade Online. It revealed that, between January and August of 2020, the U.S. exported 44,173 tonnes of plastic waste to 15 Latin American countries. That amounts to at least 35 containers of plastic waste arriving in the region daily.

The countries that imported the most waste during the first eight months of 2020 were Mexico with 32,650 tonnes, El Salvador with 4,054 tonnes and Ecuador with 3,665 tonnes. Further, the waste is not classified in detail when it is imported, making it hard to trace.

There has been greater international attention on the fate of plastic waste shipped abroad since China banned exports in 2018, as the letter pointed out.

“Globally, there is growing concern about the shipment of plastic waste from significant powerhouses such as the United States, the largest exporter of plastic waste, to nations with weak legislation and controls,” the signatories wrote.

While it is the largest exporter of plastic waste, the U.S. has not signed the Plastics Amendment to the Basel Convention on the Control of Transboundary Movements of Hazardous Waste and their Disposal. In this agreement, reached in May 2019, countries promised to reduce the flow of plastic waste from wealthier countries to less developed countries that don’t have the infrastructure to properly dispose of it, The Guardian reported.

The amendment gives local governments the right to say yes or no to any waste shipped from developed countries to private companies in the developing world. That means that governments in Latin America also have a role to play in refusing U.S. waste.

“Regional governments fail in two aspects: the first is inspections at customs because we don’t really know what enters the country under the guise of recycling, and they also fail in their commitments with international agreements such as the Basel Convention,” GAIA spokesperson Camila Aguilera told The Guardian.

The letter signers are making the following demands: