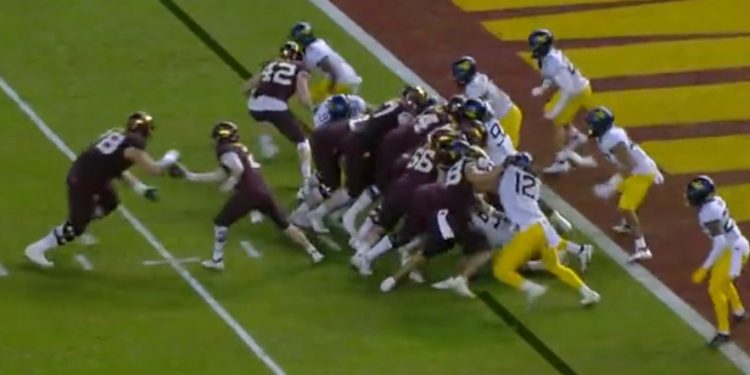 Daniel Faalele is going to play professional football for quite a while once he makes the jump to the NFL. The 6’9, 380 pound tackle for the Minnesota Golden Gophers is one of the most interesting offensive line prospects in the 2022 NFL Draft, and because he is a senior, Tuesday night’s bowl game is the last time he will suit up at this level.

The game itself is not exactly one of the tentpoles of college football’s bowl season, as Minnesota is playing West Virginia in the Guaranteed Rate Bowl. Having said that, the big fella gave us one of the best moments in this year’s bowl calendar during the second quarter, when the Golden Gophers faced a first-and-goal from WVU’s 2.

Instead of lining him up on the line, Minnesota thought it’d be cool to put Faalele at fullback. You can guess what happened next: Faalele received a handoff, trudged forward, was not taken down by a single Mountaineer, and broke the scoreless tie.

Minnesota brought in the big man to score

Faalele was an All-Big Ten offensive lineman this year, so we assume that any NFL team that drafts him is going to, you know, take him because he is huge and hope they can mold him into a bookend on the line for the next decade-plus. But please, whichever team takes him, let Faalele play some fullback.