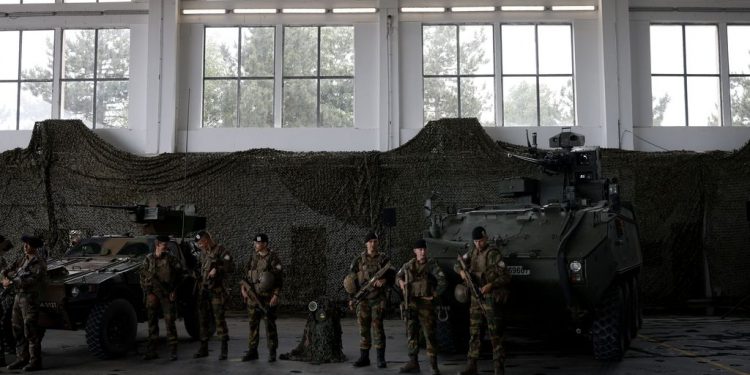 NATO leaders will proclaim a united wartime front this week at a summit in Madrid. Yet the quandaries that once left NATO adrift are still bubbling.

Before Russia sent its troops streaming into Ukraine, NATO had been searching for reinvention.

For some, China and its expansive, modernizing military presented NATO’s next big challenge. Others wondered what the Afghanistan war quagmire meant for the alliance’s future. In 2019, French President Emmanuel Macron said NATO was experiencing “brain death.”

Then Vladimir Putin reminded them all that Russia was still willing to pillage, bomb and murder on a grand scale in an effort to consume an entire country in NATO’s own backyard.

The military alliance suddenly found renewed popularity, with Finland and Sweden clamoring to join. And it inadvertently found that its next act resembles its original one: defending its eastern borders and deterring Moscow.

The decisions at the Madrid summit will now “prepare the alliance for a new phase of the relationship with Russia,” said Alexander Vershbow, a veteran U.S. diplomat. NATO, he said, “will have to change.”

That doesn’t mean NATO’s existential questions are solved, though.

Publicly, NATO leaders this week will endorse a new “Strategic Concept” — a once-a-decade blueprint laying out top imperatives and challenges. Behind the scenes, though, NATO diplomats have been scrambling to revise the long-term strategy, seeking compromises on how to present threats and priorities as the alliance grapples over when and if today’s Russian menace will eventually give way to other perils, most notably from China.

“There are always differences of perspectives and views that you find across NATO with 30 different countries represented around the table,” said Julianne Smith, the U.S. ambassador to NATO.

While the alliance is consumed with the effort to arm and finance Ukraine, it simultaneously wants to recoil from direct conflict with Russia, the world’s largest nuclear power. Europe’s push for more strategic military autonomy also remains a lively debate, as does the possibility of NATO-skeptic U.S. leaders reclaiming power. China and other long-term threats are not receding.

“Obviously, at this moment, due to the Russian invasion of Ukraine, we are very much focused on collective defense,” Portuguese Foreign Minister João Gomes Cravinho told reporters last month.

But, he stressed, “the current focus on collective defense,” while “very important, will not necessarily be the focus over the next few years.”

After Putin declared all-out war on Ukraine, NATO was, once again, in great demand.

Allies began committing to boost defense spending at home after years of reluctance. Germany upended decades of post-World War II dogma to send Ukraine weapons. Sweden and Finland ditched military neutrality to seek NATO membership. There was an agreement — NATO must reshape itself amid the first full-fledged war on European soil in the 21st century.

“I’ve been pleased to see how much the alliance has come together in recent months,” said Smith, the U.S. ambassador.

The most immediate dilemma for the alliance has become how to better protect its more vulnerable eastern members without significantly increasing the risk of all-out war with Russia.

The question touches on a sensitive history for Baltic members like Lithuania, Estonia and Latvia, which still recall their days as part of the Soviet Union. They are all quick to warn the Western allies against dismissing Moscow’s histrionic military threats.

They argue the West’s unwillingness to confront Moscow over the last decade-plus is precisely what led to the current situation, pointing to the tempered international response after the Kremlin invaded part of Georgia in 2008 and annexed Crimea from Ukraine in 2014.

French and Belgian NATO troops stand next to military vehicles at Mihail Kogalniceanu Air Base, near the city of Constanța, Romania on June 14, 2022 | Yoan Valat/POOL/AFP via Getty Images

“For countries like the Baltic states, it’s important not only words but also deeds,” Latvian Minister of Defense Artis Pabriks told reporters earlier this month.

In response to these concerns, NATO allies have sent more troops, planes and ships to the eastern flank. But numerous eastern members are vocally pushing for more. They want a larger-scale, more permanent troop presence in the region.

Many western European countries, however, feel such a permanent approach would unnecessarily close the door to eventually improving relations with Russia. They want to keep a small avenue available in case a new regime comes to power in Moscow and diplomatic dialogue becomes viable again.

For now, the alliance has taken a middle-ground approach. Germany, for instance, has pledged to up its military’s presence in Lithuania — but with reinforcements that in part come from troops based in Germany and rotating through the country.

“There is a lot of caution here,” said Jana Puglierin, head of the European Council on Foreign Relations’ Berlin office. German Chancellor Olaf Scholz, she added, “wants to make sure that he has done everything in his power to walk this fine line.”

The German approach is expected to mirror the compromise NATO will endorse at its upcoming summit. Allies will place more weapons and equipment along NATO’s eastern edge, perhaps even building more headquarter operations there, as well.

On Monday, NATO Secretary-General Jens Stoltenberg said the alliance will boost its high-readiness forces to more than 300,000 troops, part of what he described as “the biggest overhaul of our collective defense and deterrence since the Cold War.”

But many of the troops themselves will only serve temporary shifts, technically remaining stationed in their own country.

While the Baltic states have indicated they are open to the arrangement, it’s not an approach that will settle the broader debate — especially if the war in Ukraine burns for months or even years.

“I think NATO will need to consider a permanent base in the Baltic states,” said Anders Fogh Rasmussen, a former NATO secretary-general.

“I also think we need permanent presence of NATO in Poland, maybe also in Romania,” he added. “It doesn’t make sense to have a lot of NATO bases and troops far from the real frontline — we should move eastwards.”

As always, economic factors are underlying the divisions over how to dole out troops and weapons.

“Obviously in terms of permanent basing, the costs can be quite different than a rotational presence where the families do not accompany the troops that come through because they rotate over six months or a year,” said Smith, the U.S. ambassador.

“And by rotating troops through, it does give you some added flexibility that you wouldn’t necessarily have with permanent basing,” she added, explaining the debate.

Other countries within the alliance, especially those along NATO’s southern flank, are quick to note that they, too, face Russian intimidation — in addition to a host of other security threats. Some are reliant on Russian energy and others have faced a flood of migrants exacerbated by Russia’s presence in countries like Syria.

“In these days in which our attention is completely focused, correctly, towards Russia and the eastern flank, we must not forget that from the south, there are also Russian threats,” Spain’s Foreign Minister José Manuel Albares told reporters last month.

“The same threats concerning energy supplies, the political use of irregular migration, jihadism, and terrorism remain strongly in places such as the Sahel or the Mediterranean region,” he added.

The decisions at the Madrid summit will now “prepare the alliance for a new phase of the relationship with Russia,” said Alexander Vershbow, a veteran US diplomat | Yuri Kadobnov/AFP/GettyImages

This debate over how to divide the load within the alliance is only poised to deepen in the coming years.

Trust that the U.S. will remain a committed NATO ally remains tenuous after four years of Donald Trump belittling the institution. And despite President Joe Biden’s unyielding pro-NATO rhetoric, Europeans realize the U.S. is still eyeing a resource shift toward China and could swing back toward NATO-skeptic Republicans. That’s left Europeans opening up their defense budgets and deliberating who can foot more of the bill.

Vershbow, the former U.S. diplomat and ex-NATO deputy secretary-general, argued the alliance should be internally rebalanced.

“With the U.S. having to shift some of its resources, and its strategic focus, to the Indo Pacific, Europe is going to have to carry a heavier load in collective defense,” he said.

“Europe needs to prepare to be the first responder for crises on NATO’s periphery,” he added, noting that this would constitute “greater European strategic responsibility — as opposed to autonomy.”

Ultimately, China hovers in the background of all decisions to place more troops — and spend more money — in Europe.

While the rising superpower has been placed on the backburner of NATO’s public messaging, it is far from giving up the ambitions that have rattled Western leaders.

Stoltenberg has said China is now the world’s second-largest defense spender as it races to become the global leader in advanced technologies — militarily and otherwise. Beijing has used this prowess to build and militarize islands in contested areas of the South China Sea and intimidate Taiwan, a self-ruled island China claims as its own.

China is still “the longer-term No. 1 multidimensional threat,” Vershbow said.

Less clear is how directly China’s goals affect the Western alliance. Unlike Russia, China stretches across East Asia and doesn’t share a single border with a NATO country. And its territorial claims, like Taiwan, are mostly off the country’s eastern shore — not right in NATO’s backyard.

“We don’t have a border with China, so it’s a completely different context,” Portugal’s Foreign Minister Gomes Cravinho cautioned.

That said, China’s military aggressiveness could have worrying spillover effects. China is increasingly tight with Russia. And the U.S., by far NATO’s biggest military, has pledged to defend Taiwan if it is attacked. Moreover, there could be massive economic fallout if Taiwan fell to China — Europe, and much of the world, relies on the country for semiconductors to power everything from smartphones to cars.

In the Strategic Concept, allies are trying to capture these complex dynamics, carefully negotiating language that describes the security issues China presents for the Euroatlantic area while avoiding rhetoric that some allies would deem to be too inflammatory.

“You’re going to see a heavy emphasis and a spotlight on NATO’s relationship with Russia,” said Smith, the U.S. ambassador. “But I also think allies recognize that China — and China and Russia together — is increasingly a challenge that we’re grappling with.”

The end result of the Madrid summit will likely be a text that describes the fortified alignment between Russia and China while outlining challenges emanating from Beijing — but without outright labeling China as an immediate threat to NATO.

“There is a concern that we need to — at least — to show that China is a challenge,” said Lithuania’s ambassador to NATO, Deividas Matulionis.

Lithuania has struggled against its own form of Chinese intimidation after it let Taiwan open a diplomatic office in its capital, symbolically granting the country independent status. In response, Beijing essentially blockaded Lithuania.

Despite this, however, Matulionis maintained that China remains an “important partner, but a complicated partner.” Even though the two countries currently have a poor relationship “diplomatically speaking,” he said, “we do not think that China is posing a military threat to the alliance.”

So while NATO will be forced to make some swift decisions about Russia and its troop positioning, China will dominate deliberations for years to come.

“While we are currently addressing the clear and present danger that we all have in this continent, we cannot pretend that we have everything fine in the Indo Pacific region, and Indo Pacific security is also important,” said Latvian Foreign Minister Edgars Rinkēvičs.

“Can NATO engage as the alliance there? This is something where I understand Madrid summit, and the Strategic Concept is not going to be the end of debate,” he said.

“I think,” he added, “it’s only going to be the beginning of debate.”