Six in 10 Americans Alarmed or Concerned About Climate, Study Finds 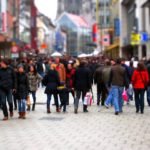 Almost 60% of Americans now fall into the categories of “alarmed” or “concerned” about climate change, with the percentage of those alarmed doubling since 2017, says a new study from the Yale Program on Climate Change Communication.

The Guardian explains that people in the “concerned” group think global warming is a significant threat, but prioritize it less and are less likely to take action than their “alarmed” compatriots.

Only 9% of Americans continue to act and express themselves in ways that suggest they remain “dismissive” of climate change, while 10% fall into the category of “doubtful,” Yale found. The remaining 20% of Americans are either “cautious” (aware but still not particularly convinced/worried) or “disengaged” on the climate crisis.

Explaining how Americans’ thoughts on climate change have evolved, the Guardian notes that when the Yale Program first began its surveys in 2008, the “concerned” category dominated.

Two years later, the number of “cautious” grew while the proportion who were “concerned” actually shrank slightly. In early 2015, the “alarmed” category was the second smallest.

Since then, however, the number of Americans who are alarmed about climate change has expanded rapidly: doubling in size since 2017, with 9% growth between March and September, 2021 alone.

The author of the study said the steady (and rapid) growth in the number of alarmed Americans was “encouraging”, since solving the climate crisis “requires strong, coordinated, and sustained action, and the alarmed are the most likely to demand and support these actions by leaders.”

To compete with the US in healthtech, emerging Europe and the UK must continue to collaborate