The Climate Impacts We Saw in 2021 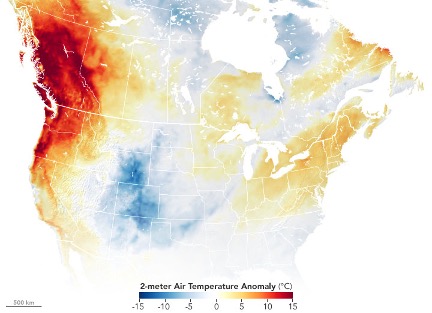 If we’re lucky, history will remember 2021 as the year that even rich nations finally stopped talking about the climate crisis in the future tense. Or just a problem for someone else, somewhere else.

The tragedy is that it took a year of unprecedented climate impacts to get there – and even then it was often a struggle to get some to even say the words “climate change.”

So how did 2021 become one for the (climate) record books? Let’s look back at a year of the extraordinary (and not in a good way) climate impacts that finally brought the crisis home for millions.

Heat waves are becoming longer and more frequent, exposing more and more people to dangerous conditions. Here’s how this reality played out in 2021.

July this year was the hottest month ever recorded.

The 2021 Pacific Northwest heatwave was the “most anomalous” extreme heat event that scientists have ever recorded on Earth. It caused hundreds of deaths and broke the previous temperature record in various locations by margins of 10 degrees Fahrenheit or more.

This heatwave pushed temperatures in many rocky shoreline habitats to exceed 50°C (122°F) — as a result, cooking over a billion seashore animals to death. Additionally, it led Canada to set a new all-time temperature record of 49.6°C (121.28°F).

(Satellite image of the Pacific Northwest heatwave in June. Image courtesy of NASA.)

Europe experienced its hottest summer on record in 2021, breaking the previous record that had just been set in 2020.

Climate change disrupts the water cycle and makes downpours and extreme floods more likely and more intense. This year saw that phenomenon play out all around the world.

Canada’s recent floods may be the most expensive natural disaster in the country’s history, potentially costing an estimated $7.5 billion.

In July, more than 180 people died in flooding and landslides in Maharashtra State, India. The same month, over 300 people died in Henan Province, China from the worst rain the region had experienced in at least 1,000 years.

Also in July, western Germany and eastern Belgium experienced historic rains, causing devastating flooding and landslides, and as a result, over 200 deaths.

In August, New York City experienced torrential rains because of Hurricane Ida. Rains so intense, in fact, that more rain fell on Central Park in a single hour than ever before in that timespan.

Also in August, parts of Middle Tennessee received up to 43 centimeters (17 inches) of rain in less than 24 hours, washing away entire homes and killing at least 22 people.

In Brazil, almost half a million people (450,000-plus) were affected by flooding from multiple rivers in May.

The worst floods in 60 years in South Sudan have affected about 780,000 people, or one in every 14 residents. Flooding in the country has set records for three years in a row.

Climate change creates hot, dry conditions that increase and prolong fire activity across the globe. In 2021, this phenomenon was evident worldwide.

More than 400,000 acres of land burned in Oregon as a result of the Bootleg Fire — Oregon’s third-largest wildfire ever.

This year, California’s Dixie Fire became the second-largest in the state’s history, burning nearly half a million acres and some 400 homes and commercial buildings.

(Charred forests in Plumas National Forest in the wake of the Dixie fire. Image courtesy of NASA.)

In fact, in August more than 130 forest fires were reported in Turkey within one seven-day period.

Forest fires in Turkey have continued for more than a week and forced thousands to evacuate their homes. President Recep Tayyip Erdogan has come under attack by his opponents over his handling of the disaster. https://t.co/DuEE0b1c1O pic.twitter.com/QuFO2uL3gh

Over 110,000 hectares (424 square miles) burned in Greece this year. That’s more than five times the yearly average from 2008 to 2020. Notably, the fires followed closely after a historic heatwave that dried up scarce moisture and left forests primed to burn.

Prime Minister Mitsotakis said that for Greece, these wildfires were “the greatest ecological catastrophe of the last few decades.”

(A large swath of the Greek island of Evia was left charred by wildfires. Image courtesy of NASA)

The science is clear: global warming is raising ocean temperatures around the world, resulting in stronger, more destructive storms.

In August, Hurricane Ida struck the US as a Category 4 hurricane, claiming 91 lives across nine states. Its damages have been estimated to cost as much as $95 billion.

(Lafourche Parish, Louisiana, before and after Hurricane Ida struck. Image courtesy of NASA)

In May, Tropical Cyclone Tauktae was the strongest storm ever to make landfall on India’s west coast. It caused at least 122 deaths and is estimated to have caused over $2 billion in damages.

Global warming is causing deeper and longer droughts, exposing a growing number of people around the planet to dangerous conditions such as food insecurity and clean water shortages.

The effects of this dry spell are already being felt. The country’s two largest reservoirs, Lake Mead and Lake Powell, reached their lowest levels since they were filled. Over 25 million people – more than the entire population of Florida – rely on Lake Mead alone for water.

Madagascar has been experiencing its worst drought in 40 years. As a result, over 1.14 million people in the region are now considered food insecure and in need of emergency aid.

(A Normalized Difference Vegetation Index (NDVI) map of Southern Madagascar in 2021. Brown areas show where plants were more stressed than normal, and greens indicate vegetation that was healthier than normal. Image courtesy of NASA)

Central and southern Brazil is experiencing its worst drought in nearly a century.

(An Evaporative Stress Index (ESI) map of Brazil this summer. Brown areas indicate plants that are stressed due to inadequate moisture. Image courtesy of NASA)

A drought that began in 2019 has brought the Paraná River, South America’s second-longest waterway, to its lowest level in 77 years.

More than half of Mexico’s water reservoirs are at 50% of their capacity or less, due, in part, to decreased rainfall and longer droughts.

In February, the entire state of Texas was under a winter storm warning for the first time ever. Around 4.3 million people were without electricity at one point, and at least 210 died. Climate change can exacerbate temperature extremes in both directions, with higher highs and lower lows.

Worth noting, low-income communities of color were the first to face power outages and unsafe living conditions as a result. The groups often least responsible for the climate crisis, the poor and marginalized, so often suffer the most from its impacts.

Fueled by unusual weather connected to climate change, Kenya experienced the worst locust outbreak the country has seen in 70 years. These are insects that can eat almost any plant, including crops of grains, vegetables, fruit, and even grass — posing a serious threat to both general food security and the livelihoods of farmers and communities that depend on them.

A study released in July conducted by over 30 scientists found that the Amazon rainforest is likely now a net contributor carbon emissions to the planet instead of a carbon sink.

But above all else, we must remember one thing: By taking action today, we can still avoid the worst of the climate crisis, and in the process, create a brighter, more just, more sustainable world.

At Climate Reality, we’re ready to continue advocating for that future in 2022 and beyond. Will you join our movement?

Sign up today for our email activist list and we’ll keep you updated on the latest climate news and opportunities for you to take action!

climate realityjust transitionyouth climate movementClean Energyfossil fuel divestmentclimate litigationBiodiversitybiodiversity lossCOP 26The Climate Reality ProjectMadagascar is Ground Zero for Climate InjusticeWhat are climate change tipping points?6 Interactive Tools to Better Understand the Climate CrisisLead: This year, extreme weather and other disasters made it clearer than ever that the climate crisis will only worsen unless we act. facebook link: https://www.climaterealityproject.org/blog/climate-impacts-we-saw-2021?utm_source=facebook&utm_medium=social&utm_campaign=generalEmail Subject: The Climate Impacts We Saw in 2021Twitter URL: https://bit.ly/3FlODuV

Tim Dowling: my father is turning 100 – but will we make the party?