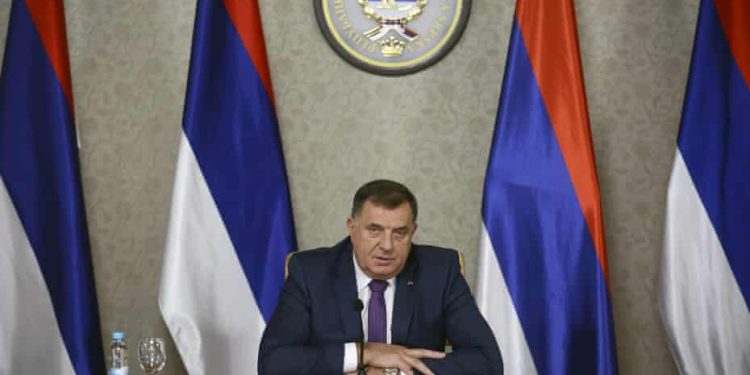 The US has imposed new sanctions on the Bosnian Serb leader, Milorad Dodik, a television station under his control and two other officials for “significant corruption and destabilizing activities”.

The sanctions, involving asset freezes and visa bans, follow Dodik’s threat to withdraw Serbs from the Bosnian national army and other state-level institutions, potentially destroying the 1995 Dayton peace treaty and opening the way for a return to conflict.

“His divisive ethno-nationalistic rhetoric reflects his efforts to advance these political goals and distract attention from his corrupt activities,” a Treasury statement said.

It said Dodik had handed government contracts and monopolies in the Serb-run half of Bosnia, Republika Srpska (RS) to close business associates. “With his corrupt proceeds, Dodik has engaged in bribery and additional corrupt activities to further his personal interests at the expense of citizens in the RS,” the Treasury said.

Dodik has already been sanctioned in 2017, for obstruction of the Dayton accord. The new measures are wider, criminalizing financial donations to him, and targeting Alternativna Televizija, a television station based in Banja Luka, the biggest town in the RS. The channel is privately owned by a company closely linked to Dodik’s family, the Treasury said, and operates as Dodik’s personal propaganda outlet.

“Dodik has awarded ATV-related contracts directly to members of his family, which he has used as yet another avenue for corruption,” the Treasury said. “He has funneled money directly from public companies to ATV for corrupt purposes.”

Dodik shrugged off the sanctions telling a local media outlet: “If they think that they will discipline me like this, they are grossly mistaken,”

A Dodik adviser, Milan Tegeltija, was also banned from entering the US. The US Secretary of State, Tony Blinken, said Tegeltija had used his former role as head of the state-level judiciary for “corrupt acts that included using his political influence and official power for his personal benefit”.

A Bosnian Muslim, or Bosniak, party leader, Mirsad Kukić, was also targeted in Wednesday’s sanction. He is accused of using his role as manager of the publicly owned Banovici mine and his seat in parliament to use “political influence and official power for his personal benefit”.

Although the effect on sanctions on Dodik are reduced by his limited financial exposure in the US, Daniel Serwer, a former US special envoy to Bosnia, said they still represent a setback for Dodik.

“They do have a psychological impact. The question of how strong the financial impact is,” Serwer said. “Basically this prevents designated individuals from international financial transactions, almost all of which go through the US in one fashion or another.”

He added: “The sanctions, in addition to targeting Dodik and Alternativa, are a warning to other politicians and companies, who may have more to fear than Dodik.”

Denmark hit by (another) spying scandal