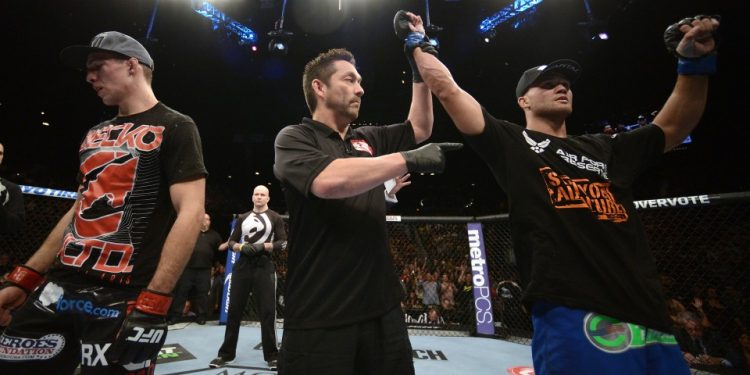 This week marks seven years since Conor McGregor captured the interim featherweight UFC title at UFC 189 but his win was upstaged by a rematch between Robbie Lawler and Rory MacDonald.

The welterweight duo first fought in 2013, during their days as contenders in the division being dominated by arguably the greatest fighter ever – Georges St Pierre aka GSP.

‘Ruthless’ emerged victorious on that occasion by split decision and went on to win the title at the expense of Johny Hendricks in 2014.

After losing to Lawler, MacDonald picked up three consecutive wins over Demian Maia, Tyron Woodley and Tarec Saffiedine to cement his status as the number one contender at welterweight.

And on July 11, 2015, Lawler and MacDonald clashed once again, this time at UFC 189 in a title fight for the ages that is still thought of by MMA fans to be the greatest of all time.

The fight started slowly but burst into life in the second stanza when a Lawler left-hand hit and hurt MacDonald who appeared to be in trouble with just 90 seconds left in the round.

Just when it appeared as though MacDonald might be on the brink of defeat he began to find success in the third frame and even managed to wobble the champion with a head kick.

He then smelled blood and went in for the finish, but Lawler was able to survive the flurry of elbows and knees that came at him while he stood against the fence.

By the fourth round, both men were covered in blood and just fighting on instinct before the round ended and they stood across from each other in one of the coldest moments in UFC.

Lawler, part of his lip missing, spewed blood to the canvas when the bell sounded to end the round and stood looking at his opponent who was also a mess by this point. MacDonald, his nose broken, stared back as both men refused to break eye contact until they were dragged away by their respective corners.

The fighters had to be separated by the refereegetty

Ultimately, MacDonald fell to the floor in the fifth round of the co-main event after taking one too many shots to his broken nose and absorbing an incredible amount of damage in the 2015 Fight of the Year.

‘Notorious’ appeared in the octagon immediately after that fight and stopped Chad Mendes to claim his first UFC title and top off an epic night of fights at the MGM Grand Garden Arena in Las Vegas.

The only sad thing about Lawler vs. MacDonald 2, is that neither fighter has really been the same since and now appear to be way past their prime.

Lawler went to war with Carlos Condit in his next fight and eked out a controversial split decision win before Tyron Woodley brutally ended his title reign with one punch.

Since then, the 40-year-old has won just two of his last seven fights and they were against Donald Cerrone, who recently retired after enduring a seven-fight winless run, and Nick Diaz who hasn’t won a fight since 2011.

Last time out, Lawler looked good for two rounds against the always entertaining Bryan Barberena but was ultimately knocked out at UFC 276.

MacDonald, 32, lost his next fight against Stephen ‘Wonderboy’ Thompson and subsequently left the UFC.

The Canadian hasn’t been the same since and has gone 5-6-1 in the 12 fights he’s taken in Bellator and PFL after his crushing loss to Lawler.

Squatting Slavs: One of the internet’s best-known memes is evolving