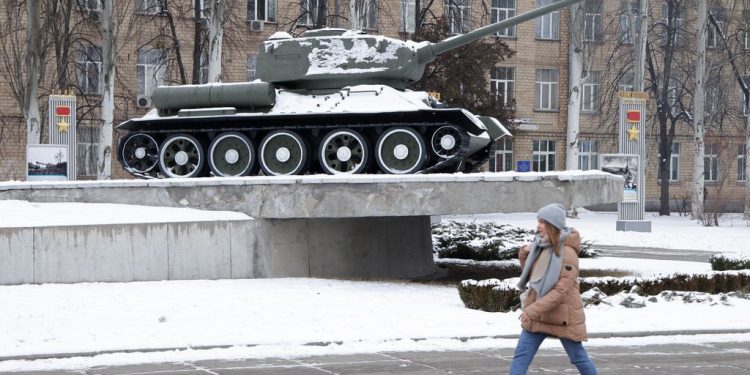 Larissa Kosmos is a Ukrainian-American writer. Her essays have appeared in The New York Times, The Washington Post, The Christian Science Monitor and in other various outlets. She also works as a copywriter for Adcom.

When my grandmother fled the Soviet invasion of Ukraine in 1944 with my then three-year-old mother in tow, the family caravan of horse-drawn wagons just a day or two ahead of the advancing Red Army, she carried her late father’s war medal with her.

The Cross of Simon Petlura — a small black cross inlaid with a silver sword and the Ukrainian trident, hooked onto a blue, yellow and black striped ribbon — had been awarded to him in recognition of his service during battles for Ukraine’s independence.

Between 1918 and 1920, he had defended the cities of Kharkiv, Poltava, Kremenchuk and Proskuriv from the Bolsheviks, who had stormed Ukraine under Vladimir Lenin’s command. Then taken captive by the Russians, my great-grandfather managed to escape, finding his way to a new regiment in Berdychiv.

As a child, my grandmother was struck by the prominent scar on his back — a mark of a severe injury and a permanent reminder of his fight for an independent Ukraine.

Today, over 100 years since my great-grandfather battled Russian forces, writing in English but kindled by a Ukrainian heart as the American-born descendant of four Ukrainian immigrant grandparents, I follow news of the war closely, my pain and pride interlocked.

Six months into this cruel reality, I am certain my motherland will prevail. We have persisted against Russia’s chronic, violent desire to smother Ukraine for generations, and we will forever persist — individually and collectively, both in Ukraine and in the diaspora.

We will continue raising individuals of strength and character.

Our strength cannot be manufactured or imported by railway or measured in stockpiles. It is borne from a legacy of courage, conviction and perseverance. Just as the Ukrainian Insurgent Army fought tirelessly in the 1940’s against both the Soviets and the Nazis, so too are today’s warriors a model of resistance and tenacity. Beyond defiance, what they’ve inherited from their forebears is humility, and the understanding that Ukraine’s right to independence is greater than any of our single Ukrainian lives.

We will keep our culture thriving.

Our pysanky — exquisitely and intricately painted Easter eggs, so delicate in the palm of a hand — are impenetrable to the force of Russian missiles. Our Ukrainian Bandurist Chorus — featuring our country’s unique 60-stringed instrument, the bandura — has survived for over a century; and as the voice of Ukraine, the bandura will never be silenced.

Our vibrant dancers — with colorful ribbons on the women’s wreaths, fluttering as they spin, and the men with their astounding acrobatics —will be executing a triumphant hopak as Russia’s tanks stall and rust. When one generation concludes the dance, the next will pick up where they left off, a recurring storm of Ukrainian energy. And our famous borsch? Hands off, Russia. It’s ours.

We will ensure our children know Ukraine’s history.

Through our diaspora’s Saturday schools and scout organizations, through our writing and films, through our museums and archives, through the work of our historians and professors, and through our own determination and agency, we will help preserve Ukraine’s story and relay it to the next generation.

We will illuminate the true version of events, leaving Russia’s fabrications in the shadows. Our history will be shared not only publicly but privately. “Listen,” my grandmother would say to me in Ukrainian as she began unspooling her World War II stories, “so that you know.”

As so many of our grandparents did before, today’s survivors will convey their experiences of trauma and resilience, fixing these realities in the minds of their grandchildren.

A young woman walks past a World War II-era Soviet T-34 tank at an outdoor commemorative display extolling the battles and victories of the Soviet Red Army in liberating the Soviet Union against Nazi Germany occupation during World War II in Kyiv, Ukraine | Sean Gallup/Getty Images

We will honor our victims, and we will raise the world’s awareness of them.

Our Holodomor Memorial in Washington stands as a tribute to the millions who starved to death between 1932 and 1933 in Joseph Stalin’s engineered famine — a genocide in which Ukrainian farmers’ grain, crops and livestock were confiscated. We have endeavored to grant those millions of souls a measure of dignity, a permanent marker on the earth and in memory, with the creation of a bronze wall in the United States capital.

Today’s victims will be honored too: The soldiers killed in battle, the civilians tortured and executed, the children and women raped, the innocents maimed by explosives buried under rubble . . . We will memorialize them and pursue justice for their pain.

We will be led by our heroes.

The strongest steel is forged in the hottest fire, and now in the throes of hell, Ukraine’s heroes are multiplying. While the blood being spilled is inciting tremendous grief as it runs throughout the land, seeping even beyond the country’s borders, it’s also nourishing august pride. Ukraine is amassing an army of role models that will be inspirational and immortal.

We will rebuild Ukraine — regardless of how long it takes.

Ukrainians worldwide will contribute money and muscle to reconstruction. With the same tenacity that built St. Sophia’s Cathedral, the Kyiv Monastery of the Caves and Potocki Palace, we will see it through — every brick replaced, every shard of hatred removed, every beam standing tall once more. No amount of ruin can destroy our will to resurrect our homeland.

And we will steadfastly support Ukraine.

Ukrainians in the diaspora have always helped the motherland. After the dissolution of the Soviet Union in 1991, we began serving as election observers in a newly free Ukraine. Many of us moved there to work, investing our talents and energies into developing the country’s nascent democratic government and free-market economy. Fueled by the descendants of World War II refugees, philanthropic organizations began emerging in Ukraine, and our youth began lending a hand, traveling to volunteer at summer camps for Ukrainian orphans.

When Russia invaded eastern Ukraine in the spring of 2014, grassroots groups like the Cleveland Maidan Association mobilized to support war efforts, supplying overwhelmed hospitals with medical aid and funding the purchase of ambulances to transport injured soldiers. Some of the wounded were brought to the U.S. for specialized surgeries, and were welcomed into the homes of Ukrainians they had never before met and who supported their recovery.

For the last six months of Russia’s invasion, the diaspora has been similarly helping to sustain Ukraine, extensively, passionately and tirelessly. Numerous organizations in the U.S. and Europe are contributing: dispatching protective helmets and vests for civil resistance; buying generators; sending donated firefighter gear for emergency service personnel; mobilizing communities to pack individual first-aid kits for soldiers; sending medical supplies and equipment to hospitals and aid to refugee camps; and bringing pediatric cancer patients, and their families, out of the conflict zone for continued medical care.

For those of us born outside of Ukraine, our citizenship and proximity to the country have never mattered. We are one Ukrainian family, devoted to each other for life.

We will persevere, despite our injuries and profound losses. When today’s fighting ends, the new scar on Ukraine’s back will remind our children of their legacy — and their duty. 100 years from now, and beyond, we will defend and support our homeland.

My great-grandfather’s war medal, which my grandmother safeguarded through her nine-month escape in a covered wagon, four years in Germany’s refugee camps, a two-week voyage across the Atlantic to the Port of New York, and a lifetime of working and raising a family in Cleveland — not living an American dream but recovering from a Russia-inflicted nightmare — is now in my care.

I’ve instructed my children to donate it to Cleveland’s Ukrainian Museum Archives when I’m gone, so that others may also see this small, concrete symbol of Ukraine’s long-standing fight for freedom.

High speed rail link to lift Baltic economies by up to 0.6 per cent